The area occupied by St. Bart’s church has been a centre of Christian worship for over one thousand years. There was certainly a Saxon church on this site long before the Normans invaded England in 1066 A.D. It is recorded that William the Conqueror granted the church at Corsham to the Abbey of St. Stephen at Caen in Normandy. The present building dates from the middle of the twelfth century, but there have been many changes and additions since then, ending with a major restoration in Victorian times. This guide will give you a brief introduction to points of interest in our church, which has witnessed to the Christian faith for so long and is still the centre of a lively worshipping community. If you decide to visit, we hope you enjoy it and remember those who have lovingly maintained the church through the centuries and continue to do so today.

Almighty God, you have created the heavens and the earth, and made us in your own image. Teach us to discern your hand in all your works, and to serve you with reverence and thanksgiving; through Jesus Christ our Lord. Amen.

SOUTH AISLE
Looking back toward the main doors is the 15th century font, panelled with Tudor roses. It is still in constant use, as people of all ages are brought through baptism into membership of the church. Behind this are two lists. One names the clergy who have served here in unbroken succession since the year 1244. The other records the patrons who have held the gift of the living—at first a succession of religious houses; then the Royal family; and finally the local landowner. The Methuen family, owners of Corsham Court estate, have been patrons since 1750. A board over the main doors carries the royal coat of arms, and the initials “W” and “M”. It is a reminder of the time (1688 to 1702) when the United Kingdom was ruled by two sovereigns—William III and Mary. Corbels supporting the roof timbers are carved with the heads of a king and a queen, a man wearing a turban, a demon, and an open-mouthed prince, among others. The king and queen are almost certainly intended to represent Henry IV and his queen Joan—as the latter held the Rectory Manor in dower for many years.

THE NAVE
Moving to the west end of the nave, the pillars on each side have remains of the rubble core of the Saxon west wall. These were exposed when the church was extended in Norman times. The fine barrel roof dates from the 15th century. Originally it was plastered in the same way as the roof of the Lady Chapel. The chancel is not in line with the nave. It is known that when the church was rebuilt in Norman times the foundations of the Saxon nave were re-used, though their axis was at an angle almost 10° from E–W The Norman chancel was aligned much more accurately to true East. Thus the unusual kink that this created in the church building is an accident of history, with no symbolic significance at all. The east bay of the nave was completely re-built in 1874 when the old central tower was demolished and galleries were removed from the north and south aisles. The two pillars immediately west of where the tower stood were restored at the same time, which is why they appear relatively new today. The small round window high up on the south side of the nave was one of the Norman clerestory windows. In the Norman church, the aisles would have been comparatively narrow, with lean-to roofs.

This church building, like every other, creates a space for God in our lives, and helps us to see ourselves in the light of God’s eternity.

NORTH TRANSEPT
The north transept was built by the Methuens at the time of the Victorian restoration, and constituted their family pew. It contains three memorials of widely different age and style. At the rear is a monument to Alice Cobb who died in 1627.It originally stood in her home parish at Adderbury in Oxfordshire, but in the 19th century it was found neglected and damaged. The fragments were taken to Corsham Court for preservation, and were re-assembled in the north transept in 1899. On the right is the small figure of a sleeping child—a memorial to Constance Methuen who died in 1849, aged 2. At the front is a modern sculpture in alabaster—a memorial to Eleanor, Lady Methuen, who died in 1958: the small figure to the right shows the young lady Methuen, a gifted artist, at work on her sketch pad. The stained glass window on the left of the transept is a tribute to Field Marshal the Lord Methuen, who died in 1932.

The builders and artists who created this church are examples of those who use the gifts of the Holy Spirit in the service of God, and provide an inspiration for others.

THE LADY CHAPEL
Before the Lady Chapel, on the left, is a late 17th century parish chest, built of 6 solid planks of oak up to 4 inches thick and reinforced with iron hands. Originally, this would have had the traditional three locks—one for the priest, and one for each of the two church wardens; but here the left-hand one has been cut out. We may surmise that this was because one of the keys was lost. The Lady Chapel was re-built between 1465 and 1480 by Thomas Tropenell, of Neston and Great Chalfield. It is entered through a stone screen—an unusual feature in a parish church where screens were almost always of wood; the stone retains traces of the two altars which originally stood outside it. The chapel is dominated by Tropenell’s great tomb—which would originally have been brightly painted. A smaller tomb in the chapel is that of his son, Christopher. The other memorials are to members of the Fuller family of Neston Park. The east window in the chapel is a fine copy of some Flemish glass in Lichfield cathedral, and dates from the restoration of 1874.

The dedication of a separate chapel to the Virgin Mary was commonplace in the mediaeval church. Her willingness to accept God’s will and become the mother of Jesus is an example to us all.

THE SOUTH CHANCEL
The area on the south side of the chancel was originally a chapel with a panelled ceiling, built around the end of the fifteenth century. At the east end is a small room (now a vestry) which was used as a consistory court for the proving of wills and similar matters. Above it is a loft protected by some fine panelling, apparently part of the original rood loft or perhaps of the former chancel screen, with traces of its original colour. The chapel would originally have had an altar against the west wall of the consistory, but this space is now occupied by an organ—a very fine example of the work of Sweetland of Bath, built in 1884: it has tracker action. (Before the Victorian restoration there had been an organ mounted in a gallery at the west end of the church). The remainder of this space contains a very fine and detailed window by Sir Ninian Comper, and is divided from the south aisle by a stone screen built in 1928.

THE CHANCEL
Successive re-modelling and additions have much altered the chancel. The east bay, which now forms the Sanctuary and is itself a late 15th century addition, was re-modelled in 1880 as a memorial to the then Lord Methuen’s first wife. The white marble angels in the riches flanking the east window are said to have been carved in her likeness. The chancel contains a number of memorial wall tablets, some interesting for their designs or inscriptions. They include a marble tablet on the south side, erected in 1632, which pays a glowing tribute to two brothers, Thomas and John Hulbert.

The service of Holy Communion is celebrated at a portable altar in front of the congregation. As we re-enact the Last Supper of Jesus with his disciples, we also commemorate his death and resurrection, and renew his presence in our lives.

THE SOUTH PORCH
The fine south porch retains an annexe built in the seventeenth century to house a staircase which gave access to a gallery in the South Aisle. A plaque over the doorway commemorates a parishioner who, we are assured, “never frequented the tents of the ungodly”! Outside the porch are niches containing figures of three saints: St. Peter, St. Bartholomew—the patron saint of the church; and, on the west side, St. Paul.

The congregation here today maintains the same faith handed on by those first Christians.

THE TOWER
The tower and spire were added in 1874 to replace the old central tower. The latter may have been in bad repair, but the principal reason for its removal was to increase seating capacity in the church which had been much reduced by removal of galleries from the north and south aisles.

THE CLOCK
The church clock bears the date 1873, but it was presumably (unless it was bought second-hand) not put into use until the tower was completed in 1877. Every day for the next 130 years, someone had to climb the tower to wind it up—for the position of the clock means it can only run for 24 hours between windings. The last team of clock-winders were Jack Archer, Edward and Celia James, Ted Culley, Roger Gardner, Fred Andrews and Martin Wilkins. An automatic winding mechanism was installed in mid 2007, funded by the Friends of St. Bart’s.

The clock was paid for by parishioners as a memorial to Rev. William Pym, who died aged 33 on 17 July 1872 from blood poisoning after being bitten by his favourite dog. He had been vicar of the parish for four years and is buried in an elegant tomb a few yards from the east end of the church. Rev. Pym’s great grand daughter recently visited St. Bart’s, having travelled from Australia, near Sydney.

THE CHURCHYARD
The churchyard contains a number of raised flat-topped “table tombs”, which were at one time popular in this part of Wiltshire. An unusual inscription on a stone at the rear of the church commemorates:

“SARAH JARVIS”
who departed this life the
11th day of December 1753
in the Hundred and Seventh
year of her age.
Some time before her Death
She had fresh Teeth. 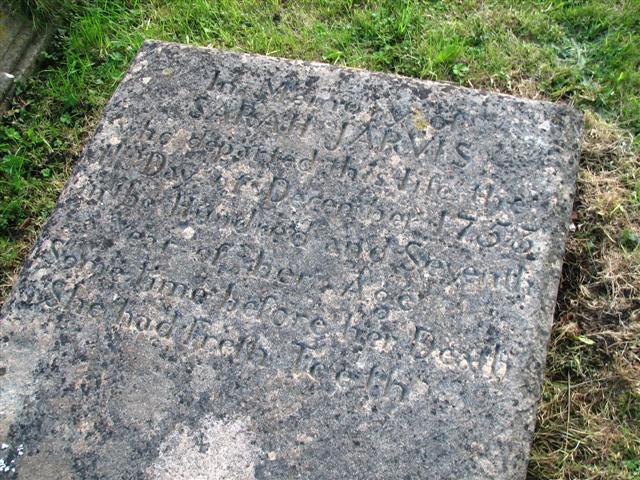