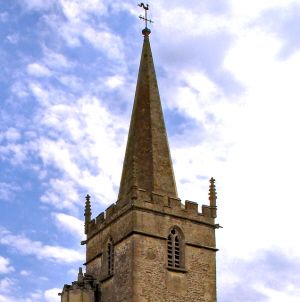 Although it is possible that there was a small Saxon church here, it is definite that a Norman church was built towards the end of the 11th century by the two landowners, Edward of Salisbury (Lacock) and William of Eu (Lackham). The dedication to St. Cyriac commemorates a favourite Norman saint. On level ground not far from the church Edward’s great, great granddaughter Ela, Countess of Salisbury, founded her nunnery in 1229. The church itself is full of later monuments to the Baynards, Bonhams, Crokes, Sharingtons, Talbots and Awdreys. In the 14th century there was some rebuilding of the church, remains of which can be seen in the lower part of the tower and some Decorated tracery in a north transept window. Lacock became prosperous through the wool and cloth trade and was advantageously sited on the London to Bath road. It was this prosperity that brought about the great rebuilding of the church in the 15th century and created the Perpendicular church on a cruciform plan that we see today. An outstanding 2 bay north east chapel was built by the Bonham and Croke families and there is an unusual east chancel arch window of 6 lights, which is of an unusual shape caused by the intrusion of the chancel arch.

In 1604 the recessed octagonal tower was either built or rebuilt. A little later the south annex, or ‘Cottage’ comprising 2 storeys and an attic was built. In a rusticated style it was described as the ‘new Yle’ in 1619. The chancel was rebuilt in 1777 in a style quite out of keeping with the late medieval church. In the 19th century the new owner of Lackham House had the Lackham, or Baynard, chapel completely altered – a new roof was put on and the transept filled with north facing pews for the family and estate workers. There was a drastic restoration in 1861 by A.W. Blomfield. The main structual alteration was the raising of the transept roofs but interior work included the breaking up of the high box pews, taking down the galleries and organ at the west end and the breaking in half of ledger stones from the floor, some of which were replaced upside down. Blomfield did present the church with a new font. In 1902 the chancel was sympathetically remodelled by Sir Harold Brakspear as a memorial to the photographic pioneer, William Henry Fox Talbot.

Where to Find Us

Lacock is a National Trust village. Visitors to the village (and therefore the church too) are asked to park in the main car park, a few minutes’ walk away.

Lacock Cemetery
Lacock cemetery is managed by the Parish Council, not by the church, and  all enquiries should be referred to the Parish Clerk, Lana Steward, on 01249 730254 or stewardpc@btinternet.com

Services are in modern language (“Common Worship”) unless otherwise indicated.