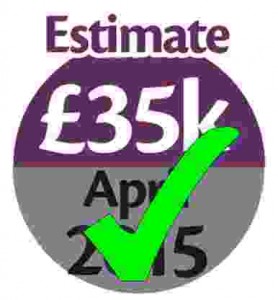 A major item of maintenance recently completed was the cleaning and repair of the church organ. It was built in 1881 by William Sweetland of Bath, a well respected organ builder, known for beautiful sounding 2 manual and pedal instruments. It as at least 50 years since the instrument has been dismantled for a thorough inspection, clean and repair. The comment has been made that it is really quite remarkable that the instrument works and sounds as well as it does after such a long period without cleaning. The overall constructions is indeed robust, and made to last, however there are moving parts, leatherwork and felt which wear out over time and need to be replaced. One should perhaps try to imagine what the inside of your home would be like had you not cleaned it for 50 years. Dust and dirt adversely affect the speech of the organ pipes – and one must remember that there are many tiny pipes inside the organ, hidden from view, some the size of a pencil which become uneven in their speech when there is a lot of dust around.

Our organ, recognized by the British Institute of Organ Studies for containing original Sweetland pipework has some 1,230 pipes within it, all of which need to be removed for cleaning, checking and re-voicing. Organ pipes are made either of wood or metal. The large wooden pipes need to be checked for splits due to past overheating of the building, and woodworm; some of the metal pipes have become distorted in their shape due to the softness of the metal, and the overall weight of the pipe. Leather adjusting buttons become hard over time, and so don’t move easily to fulfill their function of adjustment, often losing their thread. Elsewhere there are small leather pneumatic motors, some of which will have developed leaks over time, so do not work efficiently.

It has taken just over two years since the decision to consider seriously the need for this work. Our first step was to engage a specialist consultant to examine the state of the organ and to advise as to what, if any, work might be necessary. Mr. Ian Bell gave us a thoroughly comprehensive report, the recommendations of which are now being followed. Mr. Bell’s credentials are impressive: his organ consultancy work has included advice at the Royal Albert Hall, Royal Festival Hall (as a committee member), Royal College of Organists (as technical advisor), St George’s Hall Liverpool, Southampton Guildhall, Grand Temple Freemasons’ Hall London, St Paul’s Cathedral, Hereford Cathedral, Gloucester Cathedral, Exeter Cathedral, Wells Cathedral, St Albans Cathedral, Sheffield Cathedral, Chichester Cathedral, York Minster, St Patrick’s Cathedral Dublin, Washington National Cathedral and many more. Following the acceptance of the report and recommendations the work was put out to tender, and we accepted the estimate from Michael Farley, Organ Builder of Budleigh Salterton, Devon, a fully accredited member of the Institute of British Organ Building. Michael has re-built instruments all over the South and South-West of England, including the fine Sweetland organ at Gillingham Methodist Church. Having accepted the estimate it was a matter of obtaining a faculty from the Diocese to allow the work to go ahead. At the same time we had asked Michael provisionally to book the first few months of 2015 for the work, subject to the confirmation of the faculty. This was confirmed during the Autumn, and so here we are.

We carried out this work now as we believe that it is better to “repair the roof before it starts to leak”. Had we waited until the organ had broken down seriously, you can see that it would have been at least two years before any remedial work would have started. As it was problems with the pneumatic elements of the organ had begun to show. On occasions a pedal note would cipher – i.e. remain sounding after the key had been released, or not sound at all. And has been said earlier, 50 years of dirt was adversely affecting its speech.

The organ was formally inaugurated and re-dedicated after the work was completed at  a special service on 28 June 2015 which included congregational hymns, choir anthems and organ solos, as well as re-dedication prayers – a copy of the service order can be downloaded here: Organ Re-dedication service order 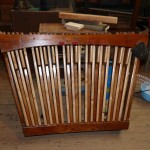 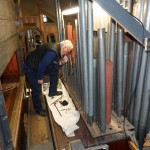 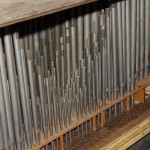 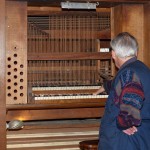 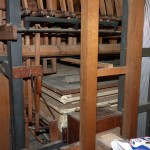 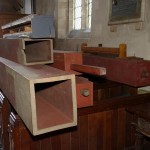 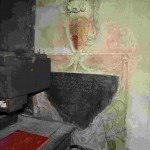